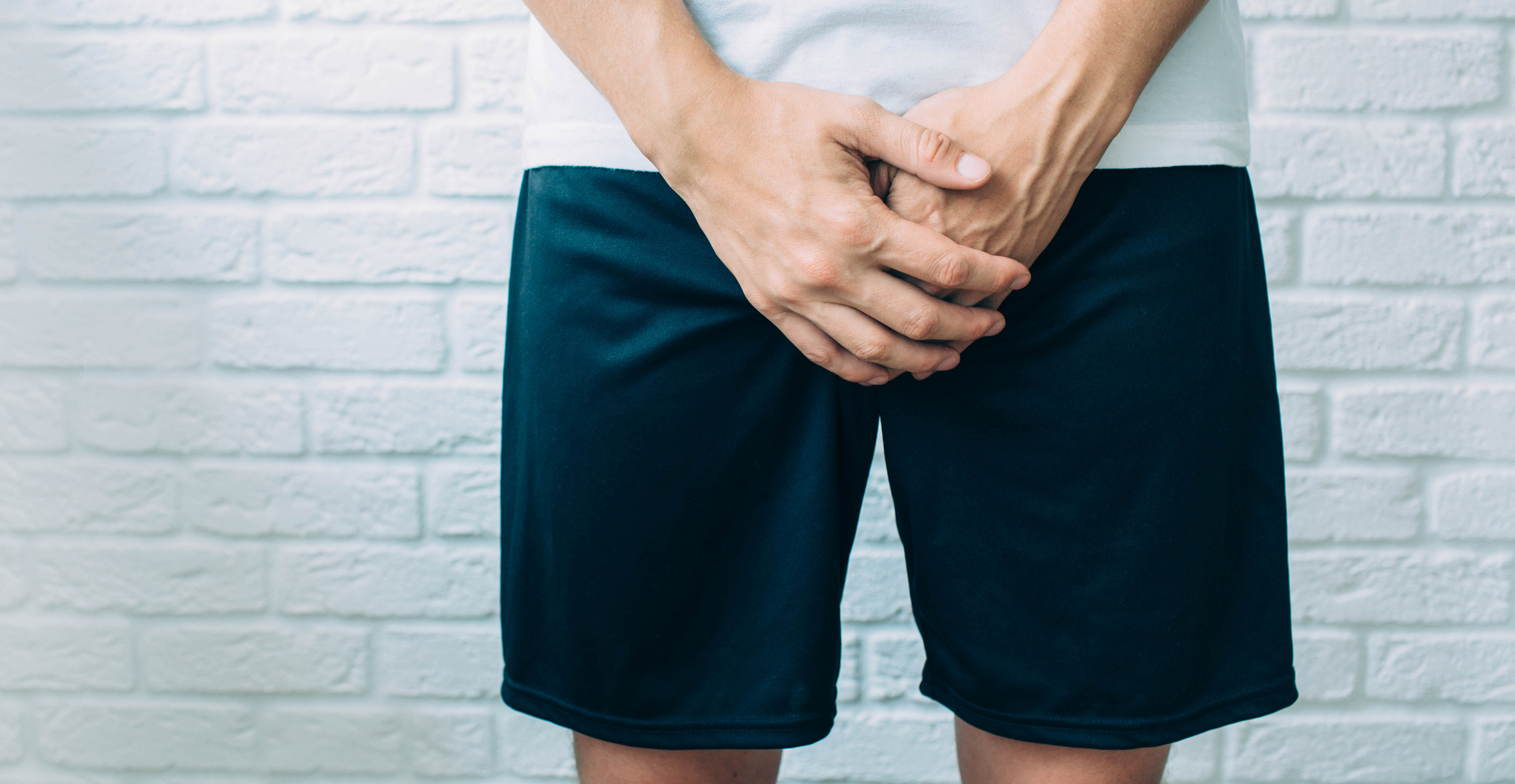 A case study illustrating the need to assess for structures included in imaging studies adjacent to the anatomical structures considered the “usual suspects” as causes for typical musculoskeletal presentations.

A 59 year old man presented with pain in the groin for 6 weeks following an injury while exercising at the gym. There was persistent pain on walking and climbing stairs. On examination, there was tenderness over the adductor origin. Clinically this was thought to be due to either muscle or a tendon tear.

On MRI, there is no evidence of significant articular cartilage loss in the hip joint, joint effusion or synovitis. Although there is a degenerative tear of the anterior labrum, this is not an uncommon finding in this patient’s demographics and can be incidental. There were no muscular or tendinous injuries in the hip.

The more salient findings are that of abnormal infiltrate in the marrow which is low in signal on T1 and high signal on T2 sequences within the anterior and posterior acetabulum. This is not isolated to the acetabulum, also involving the pubic angles bilaterally and the right ischial spine.

On close inspection of intra-pelvic anatomy, there is also an exophytic mass arising from the prostate gland, extending beyond its capsule, invading the bladder, and associated with restricted diffusion on the diffusion weighted sequences, as well as pelvic lymphadenopathy.

This case illustrates the need to assess for structures included in imaging studies adjacent to the anatomical structures considered the “usual suspects” as causes for typical musculoskeletal presentations.

The diagnosis was confirmed as a neuroendocrine prostate cancer and the patient underwent chemoRx.

Figure A – Coronal PD fat saturated sequence of the hip shows little in terms of cartilage wear or tendon pathology; however, there is high signal marrow infiltration of the acetabulum. 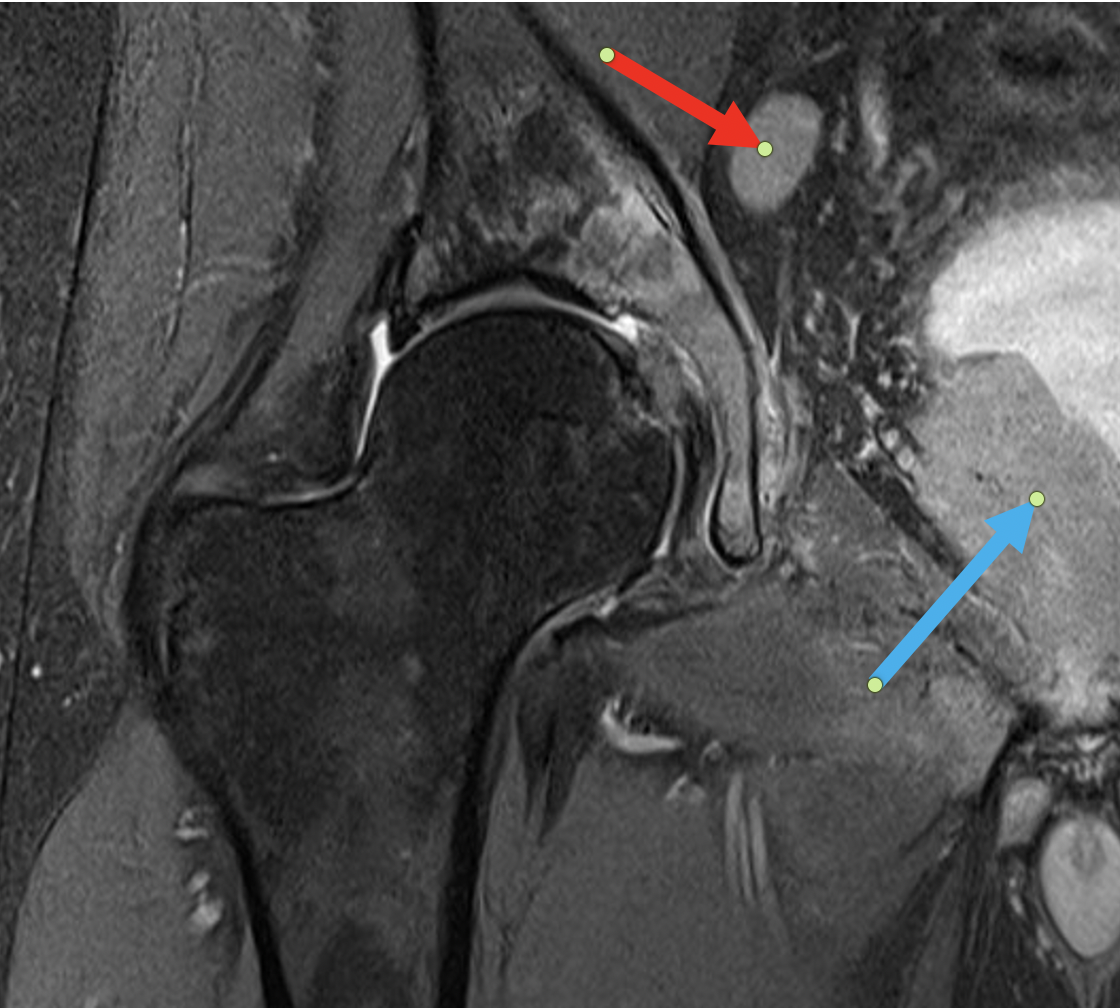 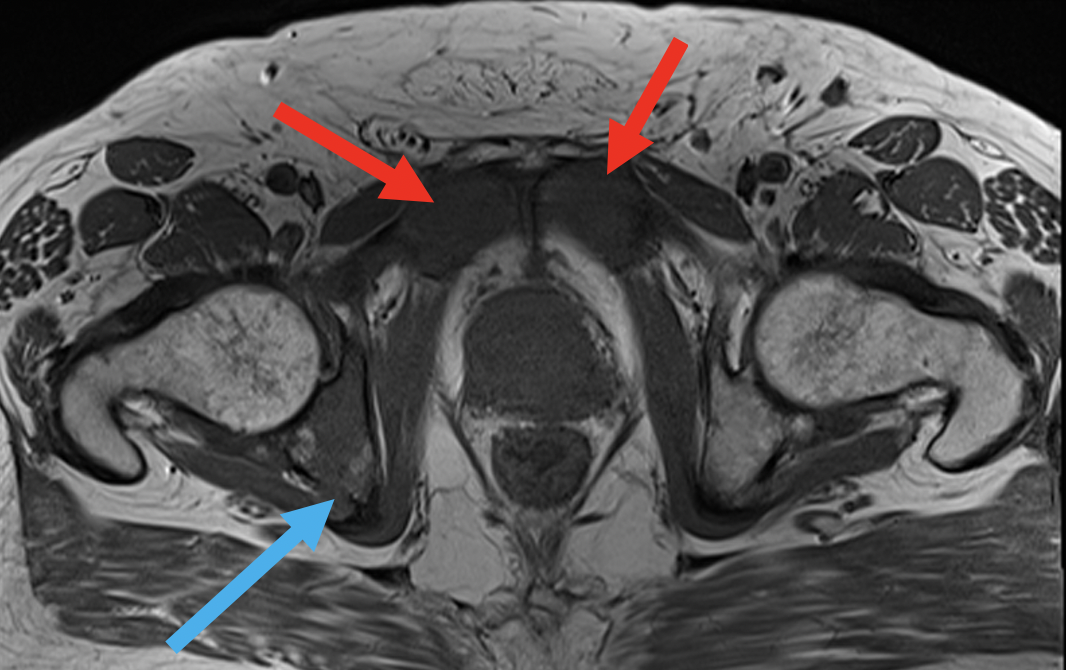 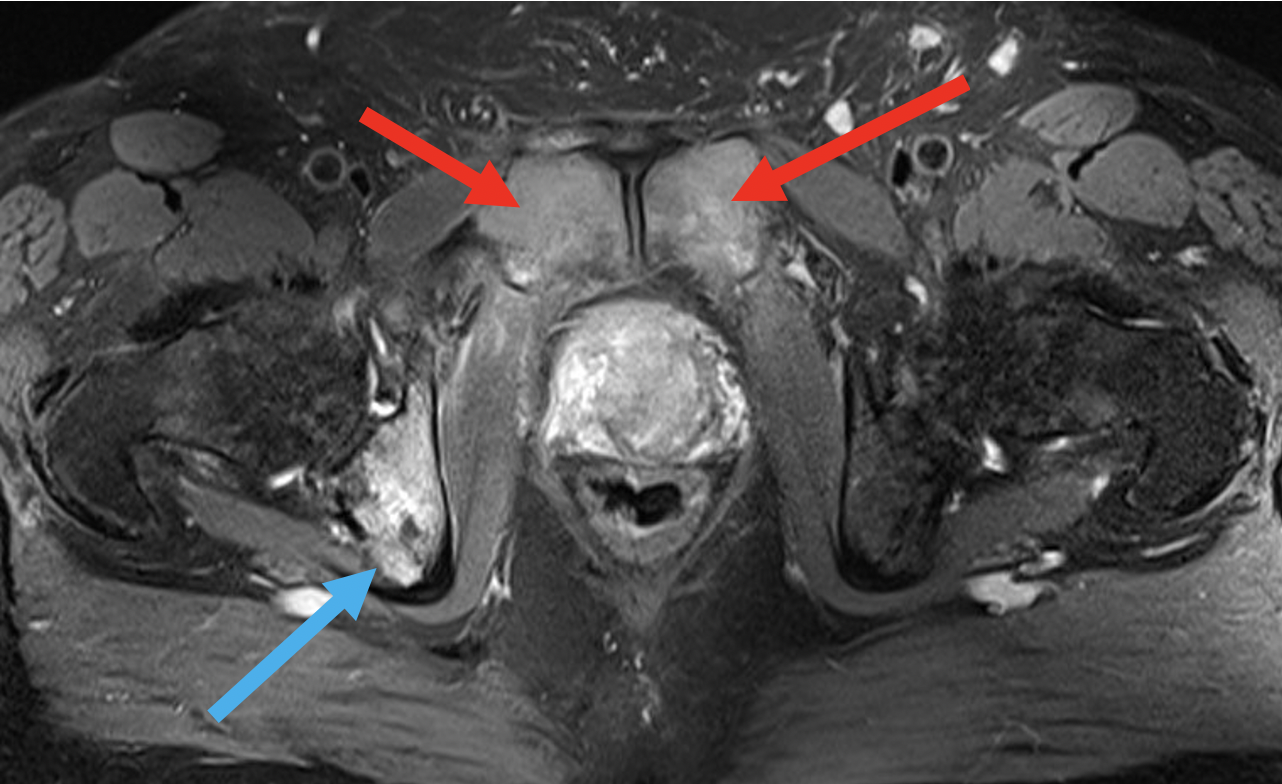 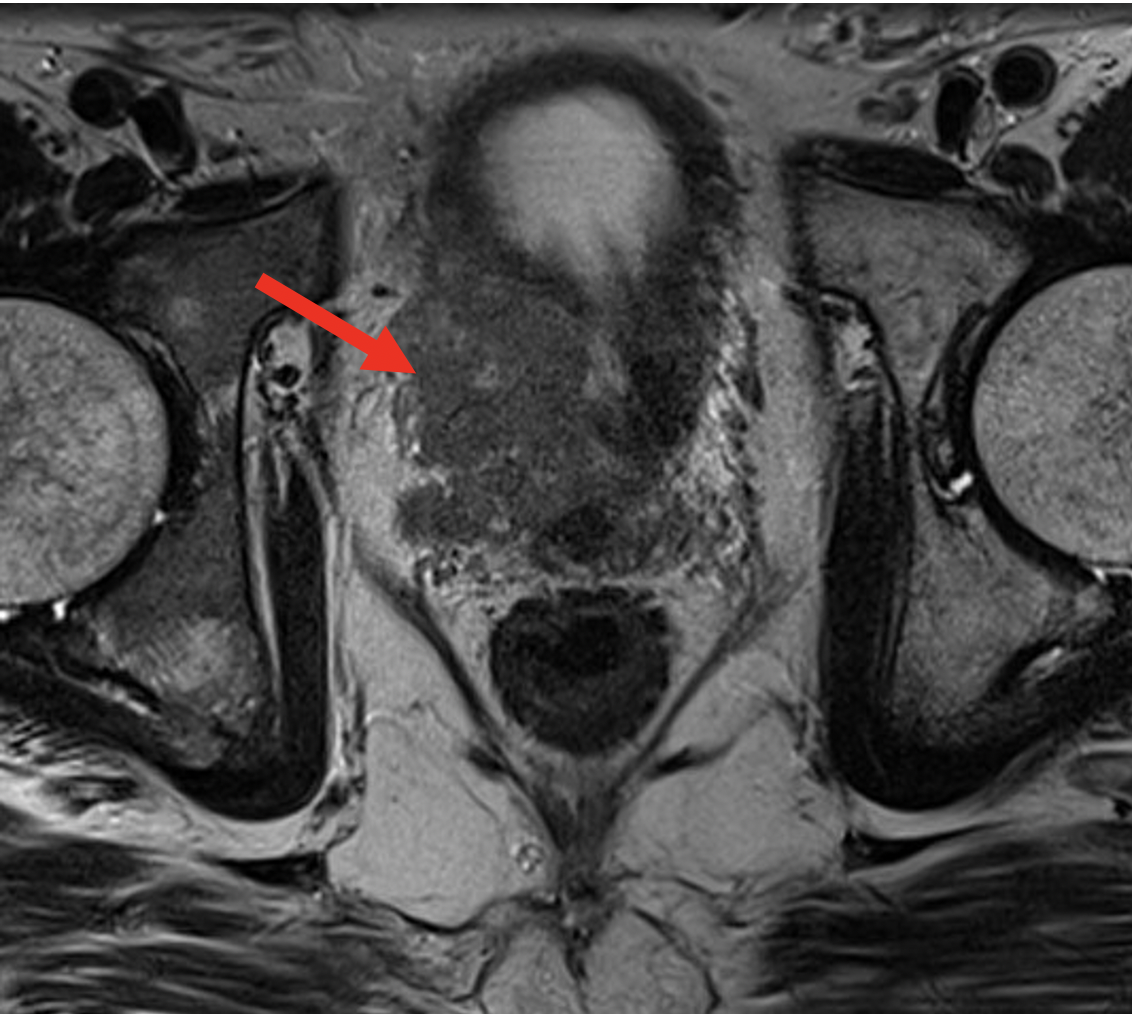 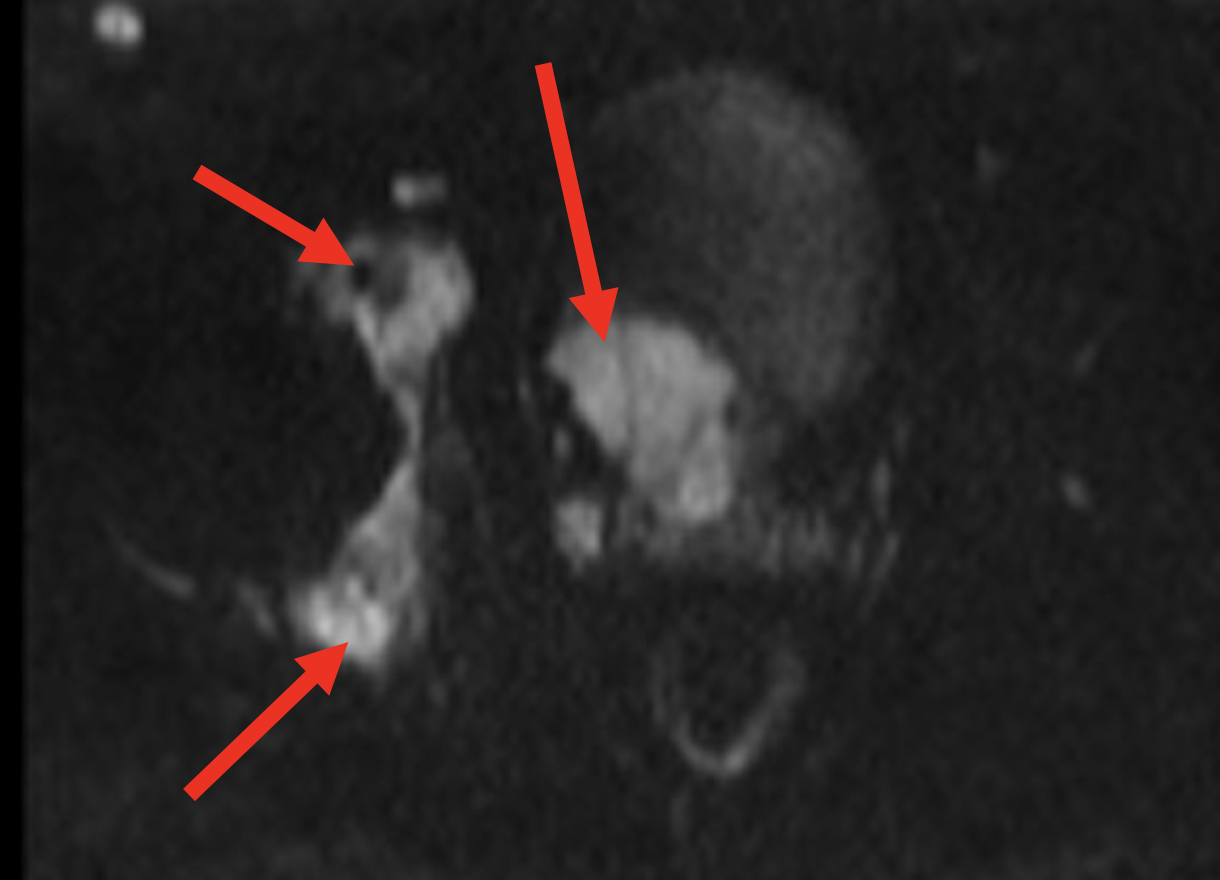