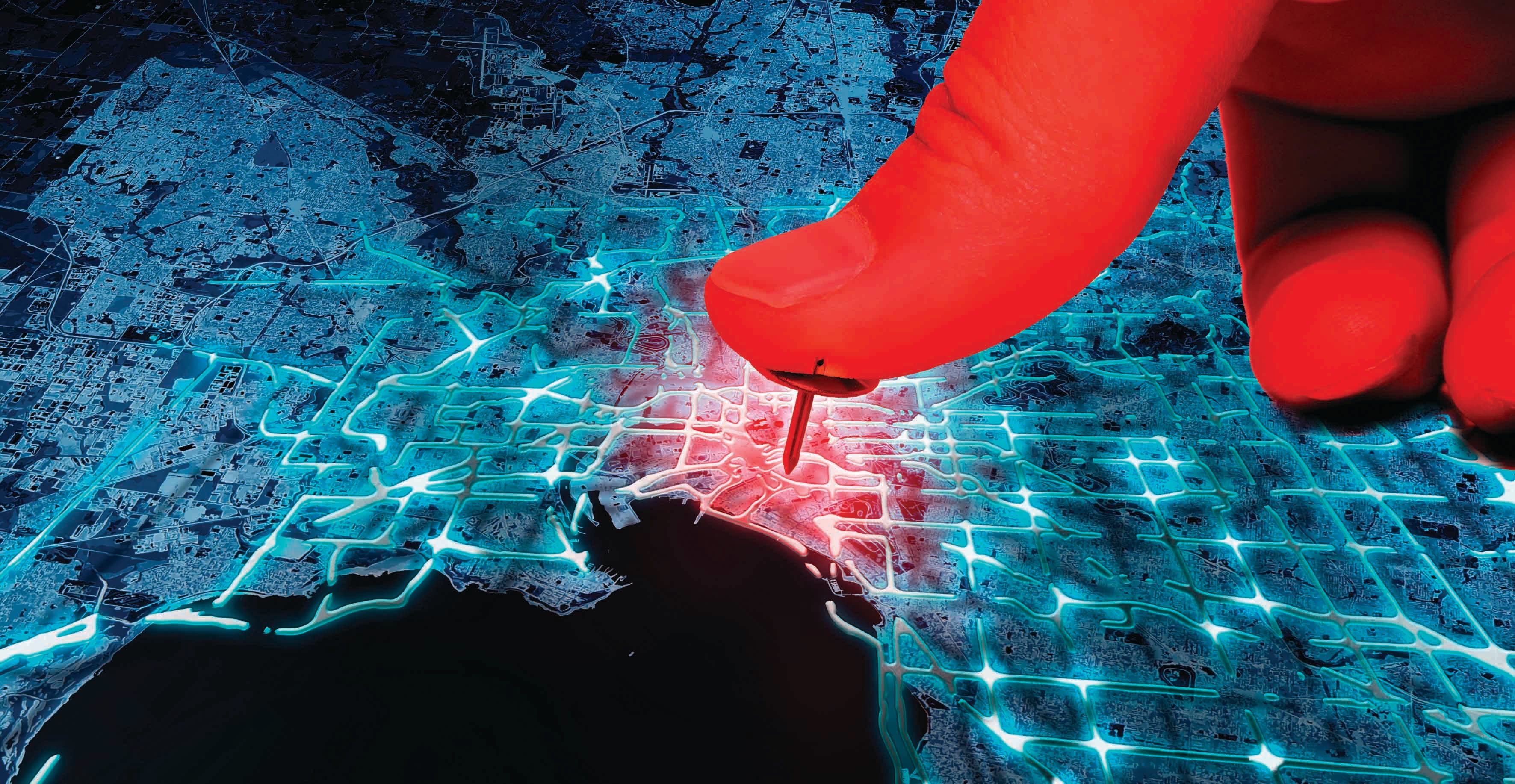 If you picked up a copy of the journal PAIN last month, you might have spotted an article by American and Canadian rheumatologists hypothesising that the global pandemic will lead to “an increase in chronic pain in the immediate and possibly long-term future”.

It was a speculative article that was read with interest by Australian rheumatologists who specialise in fibromyalgia; more than one rheumatologist flicked me a link to the article (one with a little note saying “I presume you’ve read this”) while I was working on this story.

The idea that COVID-19 could trigger symptoms of chronic pain, chronic fatigue, sleep problems and brain fog is becoming more of a talking point among rheumatologists for two reasons.

Firstly, we know that viral illnesses do trigger fibromyalgia in some susceptible individuals.

Up to 12% of patients infected with Ross River virus, Coxiella burnetii (which causes Q fever), and Epstein-Barr virus experience pain, fatigue, and memory difficulties for up to a year after infection.

A chronic post-SARS syndrome of fatigue, diffuse myalgia, depression, and non-restorative sleep was seen in some patients for almost two years after infection.

The argument that Professor Daniel Clauw from the University of Michigan and his colleagues make in their article in PAIN is that COVID-19 could have a similar effect.

There are now a few studies tracking the longer-term effects of COVID-19 and the early results suggest that many patients don’t feel like they are back to normal, even after a few months.

Anecdotally, post-COVID patients report unusual fatigue, sleeplessness, brain fog, heart palpitations, chest pain, breathlessness and loss of smell months after being infected.
Around 95 days after first experiencing COVID symptoms, UK epidemiologist Professor Paul Garner wrote: “I am unable to be out of bed for more than three hours at a stretch, my arms and legs are permanently fizzing as if injected with Szechuan peppercorns, I have ringing in the ears, intermittent brain fog, palpitations, and dramatic mood swings.”

The risk of chronic pain in patients who’ve been in ICU is quite high; between a third and half of patients who survive ICU report persistent chronic pain two to four years later, according to one survey.  And many people with COVID wind up in the ICU, which means it’s likely that some will experience these long-lasting effects.

The experience of having COVID-19 is psychologically distressing in many cases, with patients reporting poor mental health, PTSD, depression and anxiety.

Chronic pain and fibromyalgia are both triggered or exacerbated by stress, so it’s not difficult to connect the dots and see how COVID might increase the prevalence of these conditions worldwide.

The second way that COVID-19 might contribute to chronic pain and fibromyalgia is through a more indirect route.

Living through a pandemic is very stressful and difficult, even for patients who don’t catch COVID. It’s possible that this stress might exacerbate chronic pain in the absence of actual infection or trigger fibromyalgia symptoms in susceptible individuals.
“With people who have chronic pain – people with rheumatoid arthritis, psoriatic arthritis and so on – there is a central sensitivity level that can be increased by situations such as coronavirus,” Dr Emma Guymer, a rheumatologist and the head of the Fibromyalgia Clinic at Monash University in Melbourne, said.

“I think we’re going to see a big surge in chronic widespread pain.” 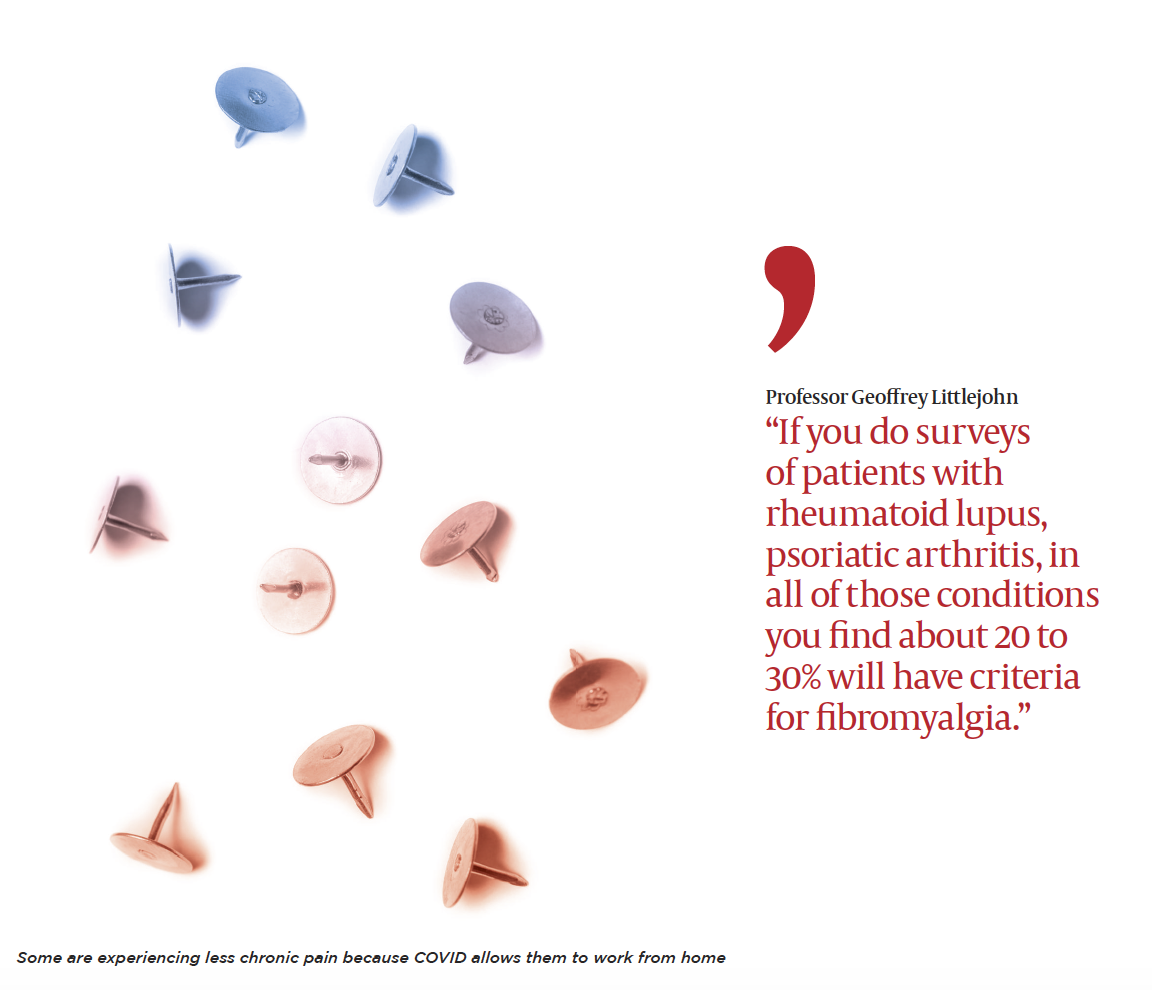 During a pandemic, stress comes in many forms, including exposure to alarmist media messages, social isolation, difficulty sourcing vital drugs due to shortages, restrictions on exercise, unemployment, financial strain, putting off medical care due to fears about catching COVID and the constant uncertainty about the future.

“Some patients might not be computer literate and cannot cope with the switch to telehealth by psychologists or therapists.

“They might have difficulty accessing their therapy if the pools and the gyms are closed. If they are living in Melbourne, they can’t go more than five kilometres from their home.”

Most people with COVID-19 have mild disease and some people have no symptoms, but it’s terribly worrying for people when they get a diagnosis, Dr Guymer says.

“What do I do? How do I isolate from my family? What am I going to do about work? How am I going to pay the rent? There are lots of things that go on over and above the physical side of the illness,” she said.

“Even just being socially ostracised. ‘Don’t go near that family; they’ve had coronavirus.’ I mean, particularly in Australia, it’s not such a common diagnosis. And so, people are really feeling like pariahs, too. And I think that that makes things worse as well.”

Rheumatologists might start to see worsening symptoms across many of their patients during the pandemic because there was a significant overlap between people living with rheumatic disease and people living with fibromyalgia, Adjunct Clinical Professor Geoffrey Littlejohn, a rheumatologist at Monash University, said.

“If you do surveys of patients with rheumatoid lupus, psoriatic arthritis, in all of those conditions you find about 20 to 30% will have criteria for fibromyalgia,” he said.

“So, fibromyalgia becomes part of the condition, part of their pain patterns.

There is currently very limited data on the impact of the pandemic on patients with chronic pain. Dr Guymer’s clinic is doing a small study comparing patient pain levels before and after lockdown in Melbourne.

“When I speak to people on the phone, you’ve got some people who are feeling much worse,” she said. “They’re worried they can’t access therapies. They’re going outside less.”

But some people living with fibromyalgia are actually experiencing less stress and chronic pain because COVID allows them to work from home, avoid the hassle of public transport and create a safe and controlled working environment, Dr Guymer says. 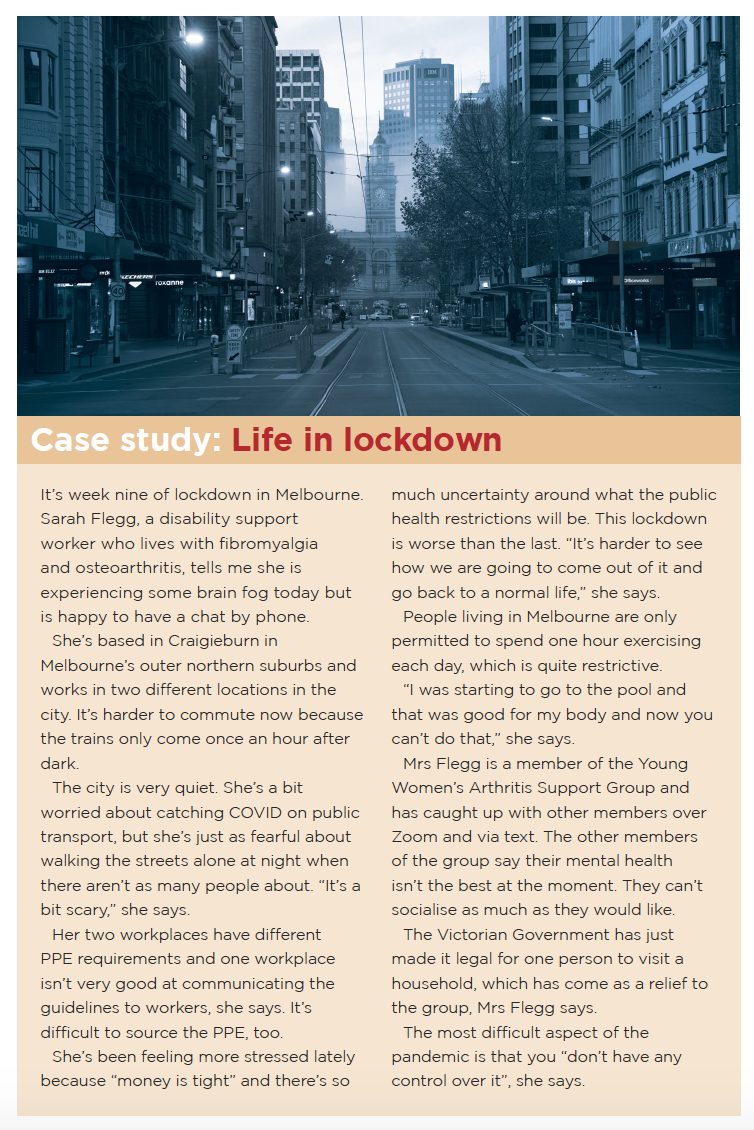 People arrive at a diagnosis of fibromyalgia from lots of different pathways, such as injury, illness, psychological stress, Dr Guymer said. “The management has to be equally nuanced in a lot of ways. We have to approach it in a multidisciplinary way,” she said.

Where fibromyalgia is connected to a viral illness, it can sometimes be difficult to separate out where the infection ended and the fibromyalgia took over because the symptoms blend into each other, Professor Littlejohn says.

“So, you have the active infection for say, two to four weeks, and then fatigue and pain and aching and fuzzy head keeps going,” he said.

“And that’s often when the fibromyalgia mechanism – the stress response mechanism – has been activated, which keeps the symptoms going beyond that. “So, sometimes people think they’ve had, you know, three or six months of the actual virus, but in fact it’s been a blend between the initial virus trigger, then the subsequent response of their neurological system in the body,” he said.

Fibromyalgia is often misunderstood in the wider community and it’s important to educate the patient about the condition as a first step to managing it, Dr Guymer says.

“This is not a disease with a cure,” she said. “This is the current state of how their central nervous system is processing incoming sensory information.”

Fibromyalgia is very well researched and characterised, and letting patients know that can be quite comforting, she says.

“A lot of people don’t like the ‘F word’ because they feel like it’s got a stigma,” said Dr Guymer. “It doesn’t matter what you call it. Fibromyalgia is nice and short. Or you can say chronic, widespread musculoskeletal pain within increased central sensitivity.

“We know that people develop less severe symptoms if they are physically active,” Dr Guymer added.

If COVID has disrupted their normal exercise routine, it’s about working on some alternatives, which might be “Tai Chi in front of YouTube in their living room or using an exercise bike at home or just going for a walk,” she said.

It was important to keep an open line of communication with the patients.

“If you’re feeling bad, let us know. It’s about making sure that they don’t feel like they’re having to cope with this on their own,” Dr Guymer said.

“In general, you have to also make sure that they’re controlling stress and pain management psychology is really, really very helpful,” she said. “In general control, stress reduction techniques, mindfulness meditation are helpful, and individuals respond to different flavours of that.

“One of the biggest things that you can do is make people feel like they’re understood.” 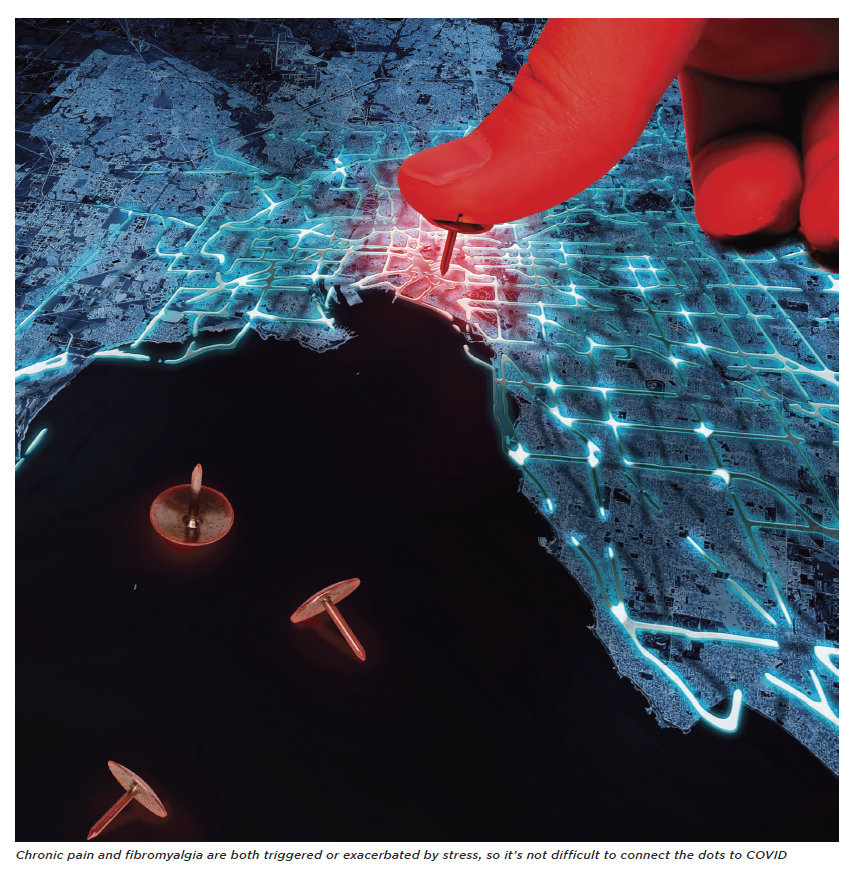